Aussie colors and markings come in an amazing variety of combinations but are really only made up of two gene pairs.

The first gene pair controls which colour an Aussie will be and they are either black or red.

The second gene pair controls the pattern and whether the coat will be solid or merle. We'll talk about this gene pair later, but first...

This means that there are three possible combinations that an Australian Shepherd could inherit. They could be BB, Bb or bb.

So, a dog with BB has two genes that are dominant for black. They will be black and will only produce puppies that are also black. Since it only has dominant genes to give its puppies would all inherit the dominant B gene and would be black even if mated to a bb.

An Australian Shepherd with the Bb gene pair is a black dog but it carries the recessive b gene for the red color. These dogs are called red carriers or red factored. If bred with a BB this dog would produce puppies that were all black. Some of the puppies would be BB while some could be Bb and also carry the recessive red gene.

So, if a bb were crossed with another bb then only red bb puppies would result.

Once you see how this inheritance works its fairly easy to determine what the chances are of different colored puppies being born in a litter.

Australian Shepherd coat patterns come in solid and merle. Merle is the mottled blend of the dog's color (black or red) to a near white or white.

Merle is the dominant gene while solid is recessive. Merle is represented by an M while solid is shown as m. As with the color gene pairs there are three possible pairings - MM, Mm and mm.

Having two merle genes results in puppies that have excessive white in their coats. This is much more serious than a cosmetic concern about appearance. The lack of pigment around the ears and eyes results in severe defects that can render the dog permanently deaf, blind or both. This is why you should not breed merles with merles.

Common to the Australian Shepherd are tan points that appear in many variations from a rich copper to a lighter cream color. Tan points also cover a range of areas from the "shepherd's spots" above the eyes, the muzzle and cheeks as well as front legs, hind legs and feet.

In cases where the tan points are diminished the spot uder the tail can be an indicator that the dog has inherited tan markings. Sometimes this is the only location that the tan coloring is in evidence.

Puppies can be born will no tan markings except in that one spot under the tail and then develop them in other areas as time goes by. This spot may be the only way to tell if a bicolor is really a tricolor.

The Irish spotting gene influences white blazes, collars, legs and feet. Plus and minus modifiers act further to change the amount of white that appears. This can result in more white appearing than is acceptable under breed standards. Excessive white is grounds for disqualification from the conformation ring.

The Piebald gene is another gene that governs white areas and can be responsible for white spots or patches appearing on the body. Sometimes this modification is so extreme as to make the dog appear to be a homozygous merle.

In order to discourage breeding dogs with excessive white and the attendant health risks breed standards set limits on acceptable areas of white coverage. White collars that extend into the body beyond the withers and white patches on the body are to be avoided.

The following illustrated Austalian Shepherd coat color combinations chart shows you the basic 16 possibilities. These combinations are the most common accounting for colors (red or black), coat pattern (solid or merle) and the degree of tan points and white markings. 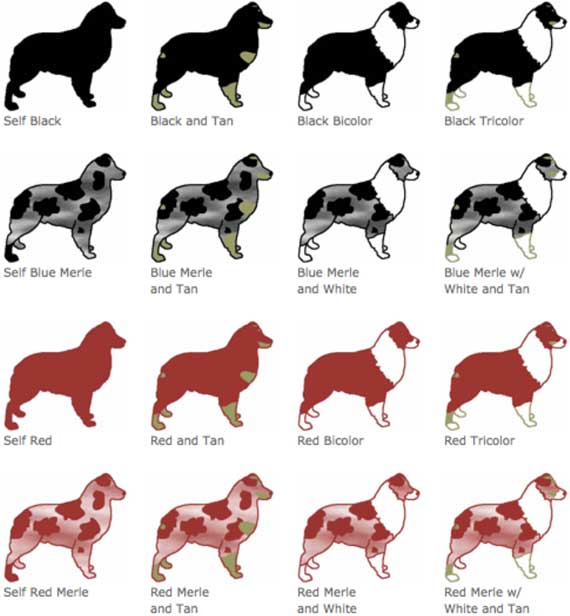 Color FAQ on ASHGI for the Australian Shepherd

Can a Short-Haired Australian Shepherd Really Be a Purebred Aussie?

About The Blue Merle Australian Shepherd

About the Australian Shepherd