Think Your Dog Is Safe Because They Tested Negative For MDR1 Gene Mutation?

They are still at risk...

While the Australian Shepherd is an aussome breed, it is vulnerable to certain genetic issues. For example, Aussies with the double merle pattern gene, also called homozygous merles or "lethal whites" (a misnomer), can have vision and hearing problems up to and including blindness and/or deafness. However, the MDR1 gene mutation can be fatal when affected Aussies are exposed to medications like Trifexis and Ivermectin for dogs (among many other medications).

Too often I hear tragic reports of Aussies whose owners have unknowingly given medications thinking they were helping their dogs deal with things like fleas, ticks, or heart worms only to find out too late that their Aussies were unusually sensitive to the chemicals. While some Aussies have recovered others have sustained permanent damage and in the worst cases fatalities have been the result.

BEWARE of Other Sources of Toxins In Your Environment 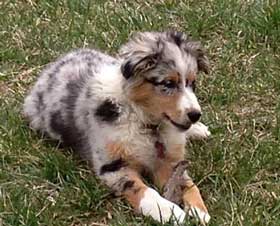 "We wormed our horses Nov 15th with Ivermectin. Knowing it is deadly to our Aussies they were kept up but what we didn't know is that animals (horses, cattle, etc.) wormed with Ivermectin pass toxic levels of it through their feces. If you have horses and dogs you understand that dogs and especially puppies love horse apples. She ingested some horses feces and around 7pm was having severe seizures and slipped into a coma." Read full story...

In many cases the owners have consulted their veterinarians and ask other Australian Shepherd owners which medications are safe and were told that this or that drug was okay to use. While this may have been true for those dogs is not true for all Aussies as some have a genetic mutation of the MDR1 gene. So it can be dangerous to simply ask others what has worked for them as the same may not be true for your dog.

So What Is The MDR1 Gene Mutation And Why Does It Only Affect Certain Dogs?

MDR stands for multi-drug resistance and the mutation in the MDR1 gene prevents many breeds, including Australian Shepherds, from removing many drugs from the brain resulting in toxicity. The MDR1 mutation is believed to occur in approximately 50% of Australian Shepherds. Dogs with the MDR1 mutation can be 200 times more sensitive to the drugs than dogs that do not have this mutation.

Dogs with the mutation lack a protein (P-glycoprotein) which is responsible for pumping the drugs from the brain. When this process is interrupted the drugs build up and permeate the brain and neurological toxicity results.

What Are The Symptoms Of MDR1 Sensitivity?

There are many possible symptoms associated with the sensitivity to certain drugs caused by the MDR1 gene mutation. It can vary widely and depend on the type of drug being administered. For example, with cancer drugs symptoms could include severe diarrhea and loss of appetite. With Ivermectin for dogs, a common anti-parasitic, one could see poor reflexes, loss of balance, dilated pupils, increased salivation, seizures, coma and death. Again, depending on the drug administered symptoms could also include anorexia and vomiting.

Since there is such a wide range of symptoms and so many different drugs that can affect dogs with the MDR1 gene mutation it is best to, of course, avoid use of the implicated drugs and to keep a close watch on your dogs for any reaction after administering any medication no matter how seemingly harmless. Remember, Imodium (loperamide) is used for the treatment of diarrhea is on the list of drugs that are considered dangerous for dogs with the MDR1 sensitivity.

The MDR1 Mutation Can Cause Sensitivity To Many Medications

Please be aware that there are many drugs that can affect dogs who are vulnerable. Some of them may be tolerated at recommended levels but can become toxic at higher levels (so proper dosing is always vital). Others can result in symptoms of varying severity (as listed above).

While you will want to investigate any medication you give your dog, Trifexis (milbemycin oxime + spinosad) and Ivermectin are those most frequently mentioned in our forums as being of particular concern, no doubt due to their wide availability and use as anti-parasitics.

While Ivermectin for dogs is not recommended for dogs that have the MDR1 gene mutation there is also growing concern about other popular medications like Trifexis. Whether the warnings are based on hard scientific evidence or anecdotal "evidence" I would have to recommend erring on the side of caution.

It is highly recommended that Australian Shepherd owners (and owners of dogs of other affected breeds) get them tested. The cost for the test is relatively reasonable and it's fairly easy to do.

Are Dogs Without the MDR1 Mutation Safe?

All dogs, even those tested and cleared for the MDR1 gene mutation, can be at risk. How? The same problem caused by the MDR1 mutation can be triggered by several medications. The effect of the drugs may result in the same toxicity in healthy dogs as would occur with dogs who have tested positive for the MDR1 mutation. Of course, these drugs would affect dogs that have been cleared, those that are carriers, and those that are affected. So, no dog is completely safe.

So instead of the normal P-glycoprotein pumps not working because of the MDR1 mutation they are deactivated by the drugs. Either way the effect of neurotoxicity is the same.

While Ivermectin for dogs or Trifexis may grab the spotlight there are many drugs that can be a direct threat to your dog. There are also other drugs that can cause your dog to be vulnerable even if they do not test as carriers or as positive for the MDR1 gene mutation.

You will also want to be vigilant about potential sources of these drugs. While you may not give them to your dog directly, what about other animals (either yours or a neighbor's) that are being treated? Is your neighbor treating their horses with ivermectin? What about a neighbor's cat that uses your flower bed as a litter-box? The feces of treated animals can contain enough residual drug to harm or kill your dog.

I hope this information helps you keep your Aussie safe and healthy.

Back to Hereditary Diseases

Back to Australian Shepherd Health Issues