Is Rimadyl For Dogs Safe?

Rimadyl for dogs is an NSAID (Non-steroidal Anti-inflammataory Drug) that is also known as Carprofen. NSAIDs are used to reduce joint pain and inflammation. The goal is to improve mobility and quality of life for dogs that suffer from arthritis. Osteoarthritis and joint pain is occurs in all dog breeds, including Australian Shepherds.

Your Aussie may be experiencing symptoms of arthritis without you realizing it. Be on the alert for signs like a decrease in activity from normal, hesitation when jumping, going up/down stairs or climbing onto the couch. If they have difficulty getting up from a laying position, are limping or appear to have a stiffness in their movements they may have arthritis.

Other pain related symptoms might have them actually appear to be in pain when touched or they may lick the affected area (note if they are paying particular attention to joints). They may even yelp or become aggressive in defence. This can also manifest as them becoming more withdrawn to avoid the movement and interaction that triggers pain. 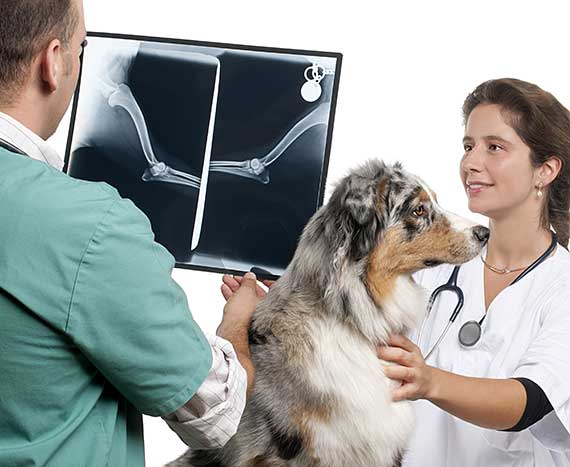 Risks of Rimadyl for Dogs

Rimadyl was released in 1997 by Pfizer Animal Health and is now marketed by Zoetis Inc. (previously a subsidiary of Pfizer) which is the worlds largest manufacturer of vaccinations and drugs for both pets and livestock. Rimadyl is actually Carprofen which is marketed as Rimadyl (as well as Novox, Rovera, Imafen, Imadyl, and Vetprofen).

While Rimadyl is considered relatively safe and is FDA approved for use in dogs it is not without risks.

There is a growing volume of anecdotal "evidence" of dogs suffering ill effects up to and including death. Most common side effects are:

While Rimadyl can improve the quality of life and even help prolong the length of a dog's life it is also potentially dangerous. The dangers posed, however, are not particular to Australian Shepherds and affect many breeds.

Rimadyl for dogs is not recommended if there is a pre-existing liver disease, kidney disease, inflammatory bowel disease, gastrointestinal ulceration, bleeding disorder (Von Willebrand's disease) as these can be exacerbated. Rimadyl should also never be taken with other NSAIDs or corticosteroids such as prednisone, prednisolone, or dexamethasone.

Not all veterinarians are familiar enough with the drug and it's side-effects so it is imperative that you discuss the risks with your vet and monitor your dog for any signs of side-effects. Ignoring side effects and continuing with the medication is dangerous and could result in fatality.

Should I Give My Dog Rimadyl?

We honestly can't say if you should treat with Rimadyl for your dog or not. There are side effects, as with any drug that have to be taken seriously. There are anecdotes on both sides. Some say that Rimadyl saved their dogs life and allowed them to live with a decent quality of life without agonizing pain. Others have posted horror stories blaming Rimadyl for their dog's death. Was it because the side-effects were ignored and not addressed properly? Was there a pre-existing condition that should have indicated against the dog receiving Rimadyl in the first place? There are many questions.

Bottom line, discuss the option with your vet if it is recommended for your dog's condition. Make sure your vet is well aware of the side-effects and that you feel confident in their knowledge of both the drug and how it relates to your dog specifically including any pre-existing conditions, or drug interactions with medication your dog is already on. Above all, be alert and monitor your dog closely for any signs whatsoever—not just the physical symptoms but any behavior that may be out of the ordinary.

Finally, if your dog does have a reaction and shows symptoms plan with your vet that you will discontinue the medication. After that you will have to remain vigilant (for up to a year in some cases) for signs of damage that may have been caused to the liver or other organs.

Taken appropriately with close monitoring Rimadyl for dogs can prove to be an ideal solution, but it is never to be taken lightly.

Back to Australian Shepherd Health Issues